BACK TO ENERGY MATTERS

Natural Gas – What is it, where is it, and how do we capture it?

Natural gas is created naturally over the course of hundreds of millions of years. It is formed when layers of decomposing plants and animals are subject to intense heat from the Earth and pressure from rocks. All this pressure, heat and millions of years turned the natural material into coal, petroleum and natural gas. Where does it come from?

Natural gas is found in rock formations deep below the surface of the Earth. Petroleum, or oil, is often found in the same areas. Humans have been using natural gas for cooking for hundreds of years.

The first industrial extraction of natural gas was in New York State in 1825. Large drills are used to bore into the Earth and unlock natural gas from underground reservoirs. Pipelines then transport the fossil fuel to the end user. Natural gas is invisible, has no odor and is lighter than air.

Does Canada have enough natural gas for the future?

Yes. According to the Canadian Association of Petroleum Producers, Canada is the world's fifth-largest natural gas producer and has enough natural gas reserves to meet current national energy demand for 300 years.

About one-third of Canada’s energy needs are met by natural gas. Natural gas burns cleaner than other fuels, it is easy to transport and it is abundant in Canada with deposits found in nearly every province and territory. 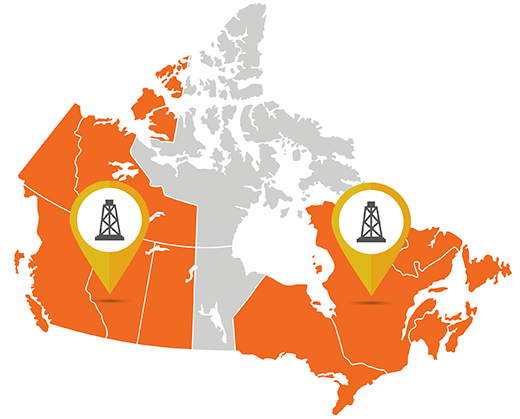 Does the United States have enough natural gas for the future?

Yes. According to the U.S. Energy Information Administration, the United States has enough recoverable reserves to last for another 84 years.

Although the U.S. supply is less than Canada’s, efficient transport systems allow natural gas to be traded between the two countries.

In the world's conversation about energy, one point is beyond debate: Energy makes a vital contribution to people's quality of life, to society and to human progress. This is true today, and it will remain true in the future. That's why Energy Matters was created. We believe it's important to equip people with unbiased information so they may form opinions, join the conversation and feel confidence in the work and accomplishments of the energy sector. Energy Matters is an initiative that provides transparent information and perspective on energy. Here, we'll cover a range of topics: the scale of global energy; the ways energy is sourced and produced; current energy technology; forthcoming innovations; the world's future energy needs; and the sustainable sources of energy that will fill them. Because energy matters to everyone, we hope you'll rely on Energy Matters as an ongoing source of balanced information.