Imagine driving along a highway, and seeing a small rock spit out from the rear tire of the truck ahead of you and ping off your windshield. While the resulting pit or chip is not going to affect the performance of your car, it’s still important enough in the interests of safety and structural integrity to have that windshield repaired.

Rocks, as it turns out, are also the most common cause of deformations—also known as dents—on steel pipelines.

We take various proactive precautions to prevent deformations from happening, including the promotion of a public awareness program—and, in the case of the Line 5 Straits of Mackinac crossing, the placement of visible signage to warn nearby water traffic, awareness briefings to those who captain the larger shipping vessels, and the imposition of a "no-anchor zone" clearly marked on National Oceanic and Atmospheric Administration (NOAA) nautical maps.

It’s important to note that Line 5’s twin pipelines (Line 5 branches into two parallel 20-inch-diameter lines under the Straits of Mackinac) enter the open water of the Straits at a depth of 40 to 50 feet, protecting Line 5 from incidents involving anchors or moving ice packs. The pipes are laid in a dredged ditch until the Straits reaches a depth of 65 feet; at depths of more than 65 feet, the pipes are secured to the lakebed using 10-foot-long screw anchors and held in place using metal saddles.

Our engineering analysis of the pipelines under the Straits of Mackinac tells us these pipes are in good condition, almost the same as when they were originally constructed.

How do we know that?

For one, our specialized tools can determine if there are any changes in the pipe wall that need repairs to prevent them developing into a problem.

We check for deformations using Caliper In-Line Inspection (ILI) tools, which use spring-loaded arms to record the shape of the inside surface of the steel pipe. The tool physically measures variances in the internal diameter of the pipeline to identify mechanical damage that may have occurred. These tools tell us where these features are located on the pipes—on top, underneath, on the side—and provide their GPS locations. Caliper ILI tools are so precise they can also measure specific characteristics of deformations, such as their size and whether they’re smooth or sharp. The tool that is utilized by Enbridge for these inspections is capable of measuring very small anomalies of approximately 0.1” (or 0.5% of the diameter).

In order to differentiate true dent measurements from tool noise (where the caliper arms are bumping over girth welds, fittings, valves, etc.), the vendors will typically set a reporting cutoff of nothing smaller than 2% of the pipe diameter. Enbridge never-the-less requires a 1% reporting cutoff be employed when complex features (wrinkles, dents in close proximity to corrosion or other dents, or multi-apex dents) are encountered, accepting the possibility that defects may be reported where the indication is merely due to tool noise.

Our expert engineers and external specialists pore over the data that’s collected, completing a preliminary review within hours to quickly identify anything that requires immediate action, followed up by a deeper analysis over the following weeks and months, to identify and locate features within the pipeline that require closer attention over the longer term.

The data collected is also layered and compared with findings from other in-line tool inspections that look for corrosion or cracking to provide a full picture of what’s happening in the pipelines.

So what did the Caliper tool find?

Below, in Figure 1, are tables that are directly excerpted from the summary section of the 2013 East and West Straits Caliper in-line inspection reports that summarize the deformations that were measured during the most recent Straits inspection.

The tool found two dents on the East Straits pipeline. The largest dent had a width of eight inches and a length of eighteen inches. There were no dents identified on the West Straits crossing. 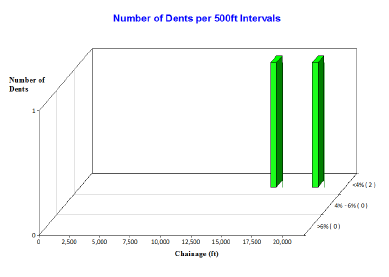 Engineering analysis tells us these dents pose no threats to the safety of the pipeline and they fall below the regulatory repair threshold, which is two percent depth for topside dents and six percent for bottom-side dents. Nevertheless, these deformations were further inspected by divers in 2014 to confirm our engineering analysis. In these locations there were no actual pipe wall anomalies identified on visual inspection, with the indications resulting from tool noise. We continue to monitor the condition of the pipe, and will take additional measurements with future in-line inspections to maintain the fitness of the pipelines.

On the West Straits, two ovalities (where a pipe deviates from its normal circular shape) were recorded; both of these ovalities had widths of 10 inches, lengths of 40 inches, and a maximum depth of 8.75 percent of the pipe’s diameter. There are no regulations for ovality limits, but Enbridge sets its own specifications of a 10 percent depth limit, and the ovalities measured well below this. There were zero ovalities identified on the East Straits crossing.

These pipelines have been in service for over 60 years with virtually no denting damage occurring. This performance is not by accident; rather, it is a direct result of the original design which used very heavy wall pipe to protect against outside force, as well as the care taken during the original construction and Enbridge’s ongoing preventative awareness program. These pipelines will continue to be inspected on a regular schedule using inline technology every 5 years and visually every 2 years, and maintenance activities occurring as required, ensuring the continued safe operation into the future.

Got a question about Enbridge's Line 5 that you don't see answered here?

Communication is a two-way street. We want to hear from you, and address any concerns you may have about our pipeline operations. You can contact us in the following ways:

We will respond promptly to calls and e-mails.

Click here for an optimized for print version of our inspection results web pages.

We take special precautions to protect the Great Lakes.

Our rigorous inspection program identifies and monitors potential issues to prevent problems, and we're sharing our inspection results with you.

Line 5 moves products that heat homes and businesses, fuel vehicles, and power industry in the state of Michigan.

Regular examinations of the pipe, both inside and out.