A little help for our Friends

After a restful winter in Mexico, millions of orange and black monarch butterflies will soon take wing and travel thousands of miles to their summer mating grounds in the United States and southern Canada.

In the mid-1990s, one billion monarchs made the 2,000-mile voyage, the second longest migration of all insects, but in early 2014, only 35 million of the beloved butterflies were accounted for. The worrisome decline — an astonishing 96.5 per cent — has been largely caused by the destruction of their natural habitat. It’s also prompted environmental groups and volunteer organizations to preserve the “kings of the butterflies” by creating pollinator gardens for them, a small but crucial move to restore monarch populations and keep the species off the endangered list. 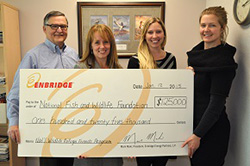 Conservation groups such as these are integral to the National Wildlife Refuge System, and thanks to the Washington, D.C.-based National Fish and Wildlife Foundation (NFWF), funding is available to Refuge Friends organizations, volunteer groups that play a key role in conserving natural resources identified for protection by the U.S. Fish and Wildlife Service.

The NFWF’s National Wildlife Refuge Friends program recently welcomed its first corporate partner – as Enbridge came on board with a $125,000 community investment contribution that will be used to support grants to Refuge Friends groups.

“Friends groups are the face of the refuge system in a lot of ways,” says Teal Edelen, manager of the National Fish and Wildlife Foundation’s central partnership office. “The Friends groups are involved with visitor services; they lead refuge tours; they may build birding programs or maintain pollinator garden for monarchs.”

The NFWF grants approximately $100,000 a year to support the conservation work of Friends groups across the U.S.; since 1998, NFWF has distributed more than 440 grants, totaling more than $1.8 million.

Enbridge has earmarked its $125,000 investment in the grant program for Friends groups near the company’s projects and operations in Wisconsin, Minnesota, Texas, and Oklahoma.

“We are (doing research) in the four states to identify the environmental needs in those regions,” says Edelen. “You can see how much this Enbridge funding will help.”

“We take our responsibility to the environment seriously, and we support organizations that place as high a value on environmental stewardship, and conservation, as we do,” says Gustafson. “We found a great national partner with the National Fish and Wildlife Foundation.”