It’s a time-honored phrase that not only describes the relationship between Enbridge and EVRAZ North America – but also captures our shared commitment to pipeline safety.

This morning, in Saskatchewan’s capital, steel manufacturing giant EVRAZ North America announced that it’s investing $200 million over the next two years in its Regina operations.

Today's investment announcement, the biggest in EVRAZ North America history, will pave the way for:

Enbridge has purchased more than two million tons of carbon-steel pipe from EVRAZ since 2006 – that’s more than 6,000 kilometres’ worth – and nearly all of the large-diameter pipe we’ll be using for our company’s large slate of energy infrastructure growth projects in the near future, including the proposed Line 3 Replacement Program, will come from EVRAZ. 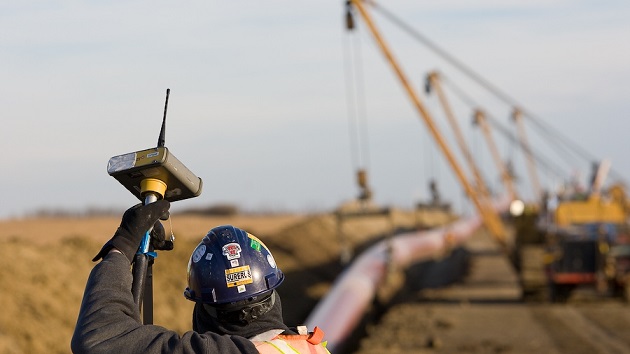 “We’re delighted to be part of today’s announcement, and to be part of a Saskatchewan success story,” Mr. Monaco told media and dignitaries during today's event announcement. “EVRAZ is a proven partner, and we’ve built a long-term relationship on our shared commitment to making safety and quality the highest priorities.”

From an economic impact standpoint, EVRAZ:

Enbridge is an integral part of that economic picture – we purchased 86 per cent of the line pipe made by EVRAZ in Regina in 2014.

We’re even more proud of our partnership with EVRAZ for our shared commitment to pipeline safety and operational reliability. For example:

Safety was also on today's agenda, as EVRAZ and Enbridge announced that the two companies will partner on a joint research and development program to enhance pipeline performance.

Along with industry and academic institutions, EVRAZ and Enbridge will help to drive continuous improvements – with the ultimate aim of optimizing industry-wide safety and reliability.

The full text of Mr. Monaco's speech is available online at enbridge.com.