A gift of love, comfort and compassion for hospitalized kids

In Manitoba, Katie Cares and Katie’s Cottage lighten the load for patients and their families

Kaitlyn Reimer was diagnosed with cancer at age 13.

Rising above the pain and the fear, though, were care, compassion and love—qualities that would come to define her legacy.

Kaitlyn was admitted to the intensive care unit of Winnipeg Children’s Hospital in October 2010, and “she noticed that a little girl had been brought in, a little girl who’d been badly beaten and didn’t have any visitors,” recalls Ruth Reimer, Kaitlyn’s mom.

“Kaitlyn said to me: ‘We have to do something for her, Mom. We have to give her something, to let her know that we love her and care about her.’ She had me go down to the gift shop and buy the most beautiful teddy bear I could find,” adds Ruth. “I got permission from the staff, and I put the teddy bear in her arms and told her: ‘There are people all around you who care about you. Kaitlyn loves you very much.’

“A couple of days later, the little girl passed away. And a few weeks after that, when Kaitlyn was getting her central line put in for her chemo treatment, she told me: ‘Mom, I know what I want to do. I want to start a charity.’ She’d already thought it all through.”

Kaitlyn passed away in May 2012, but her legacy, Katie Cares, lives on.

Since 2011, the registered charity has provided kids admitted to hospital in the Manitoba communities of Winkler, Altona, Carmen and Portage with Katie Cares Bags—which can include a blanket, book, crossword puzzle, coloring book or other surprise, depending on age, but always contain a teddy bear for companionship. Katie Cares also provides small stuffed animals to kids needing services at those hospitals for the day. 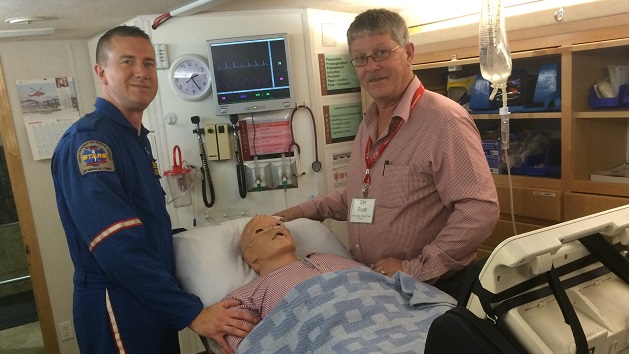 And in August 2016, Kaitlyn’s final wish became reality—a “home away from home,” in the style of Ronald McDonald Houses, for family members whose loved ones have been admitted to Boundary Trails Hospital in Winkler.

Directly across the street from the hospital, Katie’s Cottage has eight rooms equipped with two double beds each, as well as mini-fridge, TV and bathroom. There’s a library, dining area, private meeting space and kitchen, where continental breakfast is served daily.

With a crew of 48 volunteers and two part-time employees, Ruth, her husband and Kaitlyn’s dad Randy, and Kaitlyn’s brother John had hosted about 570 visitors for a nominal fee through the cottage’s first nine months—and provided care bags for about 580 kids aged 3 through 14.

“Kaitlyn felt that the hospital was a scary place for kids, because it’s such an unknown. She wanted kids to have a good memory of their hospital visit,” says Ruth, now executive director for Katie Cares. “And she always envisioned Katie’s Cottage as a soft place to land . . . a home away from home.”

In 2016, we invested about $259,000 in community-strengthening initiatives across Manitoba. Recently, we made a $1,500 donation toward Katie Cares Bags for kids.

“We’re very proud of the cottage, and how it’s helped the community,” says Ruth. “Kaitlyn started it. I would give her all the credit.”

(TOP PHOTO: Kaitlyn Reimer, who established the Katie Cares charity in southwest Manitoba before passing away in May 2012.)