Detecting corrosion under insulation with the bracelet probe

Piping Up For Technology Series (Part 4)

Innovation never stands still – there’s always a new advancement coming down the pipe. Enbridge is constantly testing commercially available technologies, and looking for opportunities to enhance existing technologies, in the areas of design, prevention, monitoring and leak detection, to keep our pipelines safe.


It’s called the bracelet probe, and it has the potential to save plenty of bling.

Dave Russell has been working in the electromagnetic technology field for more than three decades. After developing evaluation equipment for heat exchangers, boilers, and water mains, his Edmonton-based company, Russell NDE Systems Inc., turned its attention in 2009 to oil and gas pipelines – specifically, insulated pipe.

The resulting inspection tool, the Russell NDE Bracelet Probe, is now used by pipeline inspection companies, and major upstream outfits, in countries around the world.

“The bracelet probe uses an electromagnetic induction technique to provide comprehensive inspections for corrosion under insulation,” says Russell. “It can penetrate insulation up to 75 millimeters thick, and it gives highly accurate results for corrosion location and condition assessment. It saves time, and it saves money.” 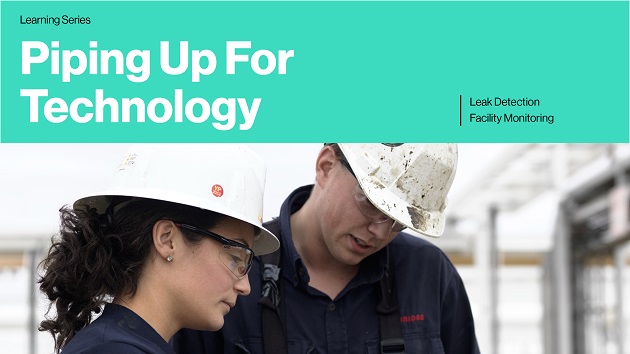 ALSO SEE: Rising to the challenge with oil-on-water sensor project: Piping Up For Technology series (Part 3) ALSO SEE: Focusing on cameras for safety: Piping Up For Technology series (Part 2)

Enbridge operates the world’s longest and most complex crude oil and liquids pipeline system—just under 17,000 miles (about 27,000 kilometers)—with an estimated one to two percent of that network consisting of above-ground piping at our facilities, including pumping stations and terminals.

We conducted our own validation of the technology in 2013 and 2014, inspecting pipes at Enbridge facilities in Edmonton, northern Alberta, Regina, SK, and Superior, WI that are covered with insulation up to 50 mm thick, as well as aluminum jacketing.

We’re now working to formally implement and adopt the bracelet probe as a proven method of inspecting corrosion under insulation on facility piping across the Enbridge network.

“The bracelet probe had earned very positive results elsewhere. We also saw a benefit in the technology, and we immediately conducted our own field trials,” says Juan Mejia, the Edmonton-based supervisor of Enbridge’s Facilities Integrity Technology group.

“We found the technology to be accurate, thorough, and very practical to use, since it can monitor facility piping that would otherwise need to have all of its insulation removed for a thorough inspection,” adds Mejia. “We’re also able to obtain real-time results, since the bracelet probe has been programmed to feed the inspection data back to a laptop computer in the field.”

Enbridge is also exploring the potential of using the bracelet probe to inspect for internal corrosion on our above-ground station and terminal piping that is covered with epoxy coatings or paint.

“The bracelet probe is a significant improvement from previous technologies used in the field. We haven’t encountered a device that can inspect our insulated pipes so quickly,” says Mejia. “We’ll be working co-operatively with Russell NDE to explore the full capabilities of this technology.”