At Enbridge, we connect North Americans to the energy they need for their quality of life.

We take this job seriously, and we’re committed to doing it safely and responsibly.

That was the motivation behind a multi-agency emergency response training exercise, co-ordinated by Enbridge, on Sept. 17 along the Indian River in Cheboygan County, Michigan. More than 18 months in the planning, this full-scale emergency drill involved more than 300 representatives from Enbridge, the U.S. Coast Guard, the U.S. Environmental Protection Agency, the Michigan Department of Environmental Management, the Great Lakes Commission, and local emergency responders.

“In our commitment to safety and operational reliability, we focus on prevention before issues arise. But we also want to be as prepared as possible in the unlikely event of an incident, and that means having detailed emergency response plans in place – and holding regular emergency response exercises as we did at Indian River,” says Brad Shamla, Vice President of Operations, Liquids Pipelines for Enbridge Energy Partners, L.P. 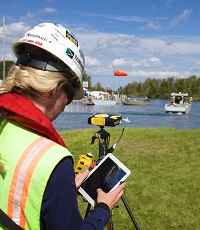 About 300 representatives from Enbridge and numerous agencies took part in the Sept. 17 drill, which involved equipment deployment on water, public notification, protection of water intakes and public parks, and educating first responders on pipeline emergencies.

The Indian River full-scale exercise, based along our Line 5 crude oil pipeline on the northern tip of Michigan’s Lower Peninsula, saw crews respond to a simulated emergency based on a third-party contractor striking the pipeline while performing maintenance work.

How seriously do we take emergency response and readiness at Enbridge? In 2012, we held 381 exercises, drills, and equipment deployment events across our operations in North America – and in 2013, we held 478 more.

For the Indian River exercise, we also invited special guests to tour the simulated response area via bus, boat, and helicopter. These guests included:

“We feel that the Indian River emergency response exercise helped strengthen relationships among Enbridge, response organizations, public officials, media, and local business owners,” says Shamla. “In the event that a pipeline release does occur, those relationships will be crucial to an effective response.”