On the Sioux Valley Dakota First Nation in Manitoba, fewer and fewer band members are familiar with the native tongue. What was once a flourishing language among the people who used to roam the Prairies in pursuit of the bison is now rarely heard among the small Aboriginal population living west of Brandon.

Students Shannen Wombdiska and Matthew Pratt are the most recent students to receive the Enbridge Dakota Language Awards – gifts of $2,500 each that will enable them to advance their mastery of their native tongue. A recent luncheon at the university – which saw the awards presented to Wimbdiska and Pratt, as well as one of the 2013 recipients, Jillian Chalmers – proved a proud moment for the ambitious students, their families, and those who support them in that effort.

“We are very fortunate that the Dakota Nation elders are able to pass on their knowledge of the Dakota language to new generations of students at Brandon University. The elders are the last people who have that language in their soul, so to speak,” says Dr. Michael Kim, associate vice-president external at Brandon University, which has a student population of about 3,000.

“The Enbridge scholarships are providing valuable assistance to our students in keeping this vital link to the past alive – so that the language may be preserved and prosper into the future.”

These scholarships bolster Enbridge’s ongoing support toward programs aimed at preserving the Sioux Valley Dakota First Nation’s treasured cultural history, says Jamie Honda-McNeil, Enbridge’s senior manager of Aboriginal affairs. Since 2012, Enbridge has made an annual contribution of $20,000 toward Brandon University’s Dakota Language Program – which covers a portion of the earnings for a native-speaking instructor to deliver the course materials, in addition to the pair of scholarships. 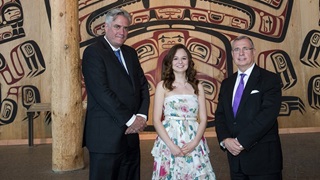 These ongoing Dakota language scholarships add to the dozens of financial awards provided by Enbridge over the past decade to Aboriginal post-secondary students across Canada in communities near Enbridge’s projects and operations – awards amounting to more than $185,000 per year.

A significant percentage of those awards are geared toward women. For instance, there are eight annual scholarships of $2,500 each offered at the Saskatoon-based Saskatchewan Indian Institute of Technologies to women studying in the trades, while Aboriginal women enrolled in business studies at the University of Ontario Institute of Technology, in Oshawa, Ont., are eligible for similar monetary awards. There are also bursaries for leadership, business engineering and more.

Beyond its scholarships and bursaries, Enbridge also invests in a number of educational programs, at institutes such as Queen’s University in Kingston, Ont., and Portage College in Lac La Biche, Alta., to advance learning in Aboriginal communities.

“We understand that life takes energy and we’re proud to bring it to communities in many small but meaningful ways, in particular through our investment in education,” says Roshan Kastrinos, a senior advisor in Enbridge’s Aboriginal Community Investment and Training, who represented the company at the November award ceremony in Brandon.

“We recognize that education is one of the most powerful gifts, and we’re proud to assist with initiatives that helps students in all stages of life get ahead.”

“When you’re talking about support for the Aboriginal population, scholarships and bursaries are one of the most meaningful types of support you can give,” he says.