Fighting back against Canada's most invasive plant

If Sleeping Beauty’s castle were located on Lake Huron in the year 2015, the impenetrable hedge that confined the sleeping kingdom would be made of Phragmites australis.

The invasive plant — whose name in Latin literally means hedge fence or hedge row — forms an impermeable barrier with its cane-like shoots, which grow two to four metres high at a density of around 200 stems per square metre. Small animals, birds, and reptiles, whose evolutionary routines have not adapted to the reed’s invasion, get caught in its dense stems, and the unlucky ones starve to death.

“Phragmites is incredibly aggressive, particularly in wetlands where it can keep its feet wet,” says Karen Alexander, outreach and education coordinator at the Lake Huron Centre for Coastal Conservation in Goderich, Ont. “It will rapidly take over and become a monoculture, and once it gets to that point, it can become incredibly difficult to control.”

Scientists believe this variety of the common reed arrived on the east coast of Canada in the 19th century. It has been damaging the Lake Huron watershed — barring public access to the waterfront, and damaging native animal and plant populations — since the early 2000s. 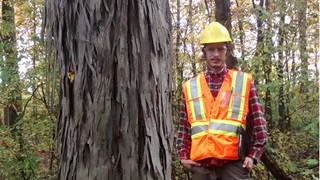 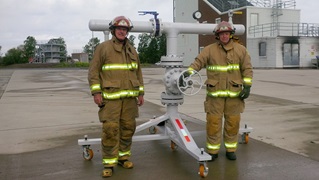 Phragmites absorbs water from wetlands, pulling nutrients away from native plants. It also has one more trick up its shoots: it releases a chemical into the surrounding soil, which degrades the structural proteins of neighbouring plants.

The Coastal Centre was one of the first organizations to raise the red flag about the phragmites problem in the region. A five-year partnership with Enbridge worth $100,000 will enable the Coastal Centre to control the phragmites along a 16-kilometre length of shoreline, which is part of the Brucedale Conservation Area, and is owned by the Saugeen Valley Conservation Authority (SVCA).

With a $4-billion green energy investment portfolio, Enbridge has more than 1,600 megawatts of net renewable and alternative energy generating capacity – and was looking to make a major commitment to an environmental project in the Kincardine area of Ontario to benefit the communities near its two wind farms, Cruickshank and Underwood, which together generate 190 MW of green-power capacity.

A pair of community events, to launch the project, are planned for June – one involving members of the public and wind-farm landowners, and the other involving Grade 4 students.

The reward for removing the phragmites will be felt at all levels of the community. Children and families will be able to enjoy the shoreline; students and members of the community will learn how to identify and remove the invasive plant; and the native species will have their homes back.

“Our commitment to the project is a legacy piece,” says Ian MacRobbie, Enbridge’s Eastern Region general manager for Green Power, Transmission and Emerging Technology. “In five years, we will really see the difference this has made.”