How do you christen a carefully crafted safety partnership?

Near the end of June, Superior Petroleum Partners—a mutual aid group established for any industrial-sector emergencies that may arise in Superior, Wisconsin—held its first full-fledged public training exercise, after five years in the making.

On June 26, that partnership was put to the test with a training exercise on Enbridge property. Firefighters from Superior FD sprayed down one of Enbridge’s crude oil storage tanks with a mixture of Purple-K, a dry chemical agent, and firefighting foam, using a purpose-built Gorilla tank and hose system. 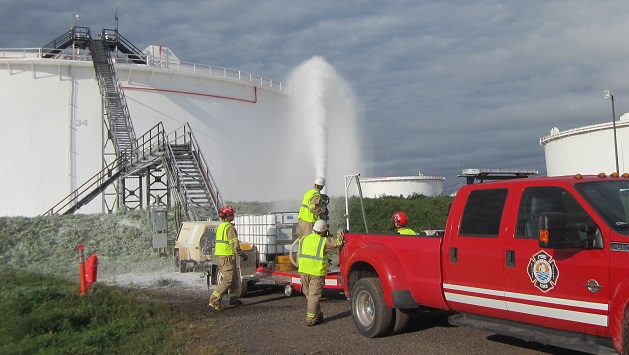 ALSO SEE: A superior safety partnership for a Superior setting

As part of the Superior Petroleum Partners collaboration, everyone brings something to the table.

Regular simulation drills, like the one at Enbridge’s tank farm, also give response teams the “lay of the land” should an emergency ever arise.

Above all else, Superior Petroleum Partners has created a sense of safety and security.

“Especially given the last three to four years, the resources Enbridge has brought to the table, the training group that has worked together, it undoubtedly helps every situation,” says Kollin Schade, manager of the Calumet refinery.

“If there were an incident, everybody’s prepared. They know how to handle it.”