Select a Report
Reports Home Contact Us Appendices My Comments

About our Report and Our Approach

CloseAll Sections
About our Report and Our Approach

We are helping the world transition to a low-carbon future.

To meet current and future demand, the world requires all forms of energy—oil, natural gas and renewable power. At the same time, demand for renewables and low-carbon energy sources is growing. As a North American energy infrastructure leader, Enbridge is well positioned to help advance the transition to a low-carbon future.

We invested in our first wind farm in 2002―at a time when large-scale wind and solar projects were still very new and had not been adopted widely across North America. From that starting point, we have made a significant contribution to growth of North America’s renewable energy industry, investing billions of dollars in wind and solar projects in Canada and the U.S., and we’ve recently begun to grow our portfolio of offshore wind projects in Europe.

We have also invested in power transmission and a wide range of alternative energy projects, including waste heat recovery, geothermal, run-of-river power generation and technologies that will make it economical to store renewable energy.

In November 2017, in the context of our three-year strategic plan and focus on capital allocation to our core natural gas transmission and distribution, liquids pipelines and utilities businesses, we announced the planned monetization of $3 billion in certain natural gas midstream assets and North American onshore renewable assets over 2018. As of the date of publication of this report, Enbridge has entered into an agreement with the Canada Pension Plan Investment Board (CPPIB) for the sale of a 49% interest in select North American onshore renewable power assets owned by Enbridge. In addition, CPPIB and Enbridge has entered into a joint venture agreement for the completion of two German offshore wind projects (Hohe See, and related expansion) and the pursuit of future European offshore wind projects. Enbridge and its affiliates will continue to manage, operate and provide administrative services for the renewable power assets. Offshore wind is a strong fit for Enbridge, given our history with onshore renewable technology, our major projects capability and our experience in working off-shore in the Gulf of Mexico. We plan to continue to grow our offshore renewable generating capacity and be at the forefront of the global transition to a low-carbon future.

Environmental and Social Benefits of Enbridge’s Renewable Power Projects
Each of our renewable energy and transmission projects provides environmental benefits. Our wind farms provide a source of clean energy. Our solar facilities generate electricity with no emissions, no waste production and no water use. Our geothermal facility is a zero-emission project that uses heat from the Earth to produce power. Our waste recovery projects generate emissions-free electricity by harnessing the exhaust heat produced by gas turbines at compressor stations. By investing in green power projects, we not only contribute to clean energy, we also help to grow the economy through employment, property taxes and lease payments to landowners.

Read our Toward a Low-Carbon Future brochure.

$7.8B committed in renewable energy and power transmission projects in North America and Europe.

Since 2002, Enbridge has invested in the development of more than 3,500 MW gross (2,500 MW net) of zero-emission energy―enough power to meet the energy needs of more than 1.8 million homes.

The diversification of our energy systems is a priority for Enbridge―one that supports the shift to a low-carbon economy, the ongoing efforts to reduce greenhouse gas (GHG) emissions, and the achievement of local, national and global climate goals, while enabling Enbridge to continue to deliver long-term value for our shareholders, customers, employees and the communities in which we operate. As part of that diversification, we have been one of Canada’s largest investors in renewable energy.

In most cases, our onshore renewable energy and transmission projects are underpinned by attractive long-term power purchase agreements (PPAs) and price swap arrangements that deliver stable cash flows and attractive returns similar to those realized by our liquids and gas transportation businesses. Our offshore wind assets are supported by strong fundamentals, including growing customer demand and decreasing costs, as well as significant renewable portfolio standard (RPS) targets. All of our offshore projects to date are underpinned by long-term power purchase agreements with local offtake partners.

We also recognize that clean-burning natural gas has a critical role to play in a low-carbon future. As North America’s largest distributor, processor and transporter of natural gas, we are well-positioned to be a leading supplier of affordable and reliable natural gas to provide fuel for power generation, industrial and manufacturing facilities, and residential and commercial heating. Natural gas complements renewables by providing a quick-start backup as renewables-related issues such as intermittency, availability, volume and energy storage are resolved.

Through our natural gas utilities, we are exploring the development and use of renewable natural gas (RNG), which has the potential to be one of the most cost-effective ways for our customers to reduce their carbon footprint after energy conservation.

Read a summary of Enbridge’s renewable and alternative energy investments.

German Offshore Wind Development – In February 2017, Enbridge announced the acquisition for $1.7 billion of an effective 50-percent stake in the 497-MW Hohe See Offshore Wind Project (Hohe See), which will be constructed in the North Sea in partnership with the state-owned German utility, Energie Baden-Wurttenberg (EnBW), and is expected to be in service in late 2019.

In June 2017, we announced we are moving forward on our option to partner with EnBW on the Albatros Wind Project, which is an expansion of the Hohe See project, for an additional investment of approximately $395 million. Albatros is expected to enter service alongside Hohe See in 2019.

We see great potential in offshore wind and to date have invested in six large projects in the United Kingdom, France and Germany for a total of approximately 1,000 MW (2000 MW gross) of net generation capacity under development. 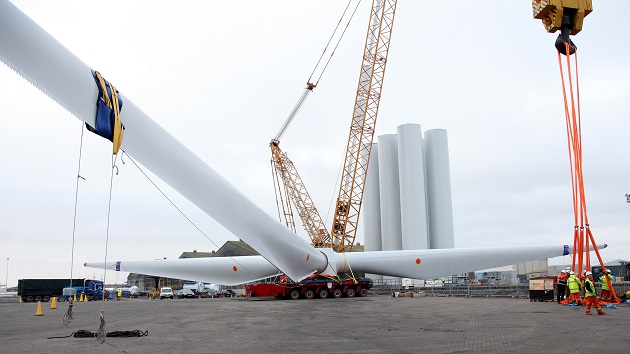 Off-shore wind is one of the fastest-growing energy segments in Europe, where there is a significant push for a greater component of renewables in the supply mix. This means these projects have very strong commercial underpinnings and secure, long-term revenue streams.

Offshore wind is a strong fit for Enbridge, given our history with onshore renewable technology, our major-projects capability and our experience in working off-shore in the Gulf of Mexico. We plan to continue to grow our offshore renewable generating capacity and be at the forefront of the global transition to a low-carbon future. In addition, Enbridge and CPP have formed a 50-50 joint venture to pursue future European early development, late development, construction, and operational offshore wind projects.

Chapman Ranch Project – In October 2017, we placed into service the 249-MW Chapman Ranch Wind Project in Nueces County, Texas. We acquired a 100-percent interest in the project in 2016. The project consists of 81 turbines and will produce enough clean energy to power more than 64,000 homes a year. With the addition of this facility, we now own six wind assets in the U.S. with a combined generating capacity of more than 1,100 MW (gross).

Rampion Offshore Wind Project – In November 2017, the Rampion Offshore Wind Project generated first power. The project, located off the Sussex coast in the United Kingdom, consists of 116 turbines, which will generate approximately 400 MW when complete, which will provide enough electricity to supply almost 347,000 homes a year. We hold an effective 24.9-percent interest in the project, while Green Investment Bank plc and E.ON SE hold, respectively, 25-percent and 50.1-percent. In April 2018, all of the wind turbines were operational and generating electricity and power to the grid. The project is due to be completed and fully operational by fall of 2018.

A major milestone was reached as first power was generated at Rampion.

Éolien Maritime France SAS – Enbridge holds a 50-percent interest in Éolien Maritime France SAS (EMF), a French offshore wind development company, which is co-owned by EDF Energies Nouvelles, a subsidiary of Électricité de France S.A. EMF holds licenses for three large-scale offshore wind farms off the coast of France that would generate approximately 1,428 MW. The development of these projects is subject to a final investment decision and regulatory approvals.

Enbridge is co-investing with Morgan Solar in a 9-MWDC solar farm in Burdett, Alberta. The Alberta Solar One asset has received funding from Alberta’s Climate Change Emissions Management Corporation (CCEMC) and is expected to reach its commercial operation date by mid- to late-2019. The project will use Morgan Solar’s revolutionary high-efficiency Sun Simba CPV modules mounted on Savanna dual-axis trackers. Located in southeast Alberta to take advantage of the best solar resource in Canada, this distribution-connected project will produce clean energy, while also creating local jobs and raising the productivity of the land. Morgan Solar’s unique solar technology is expected to be nearly double the efficiency of conventional solar panels, while still competitive on price.

In 2017, Enbridge teamed up with ATCO for a residential-energy-emissions pilot project in Alberta aimed at developing homes that reduce or eliminate greenhouse gas emissions.

More than 150 Enbridge employees applied to have their homes retrofitted. Through a detailed selection process, which was primarily based on home size, energy usage and location, we narrowed the applicants down to four homes and selected two in Calgary and two in Edmonton, while ATCO selected three of their employees’ homes.

The installation of the solar panels and mCHP units was completed in December 2017. During 2018, Enbridge and ATCO will monitor the retrofitted homes to understand their energy consumption and learn more about how micro-generation can play a role in heating and lighting our homes while also lowering emissions and providing cost-saving benefits to homeowners.

RNG is a carbon-neutral, sustainable fuel that is created from decomposing organic waste. This waste can come from many sources, including landfills, wastewater treatment plants, farms and residential organic waste. RNG is compatible with all natural gas appliances. In February 2018, Enbridge Gas Distribution and Union Gas Limited initiated a request-for-proposal process in Ontario to kick-start the provincial market for RNG, allowing customers to lower their GHG emissions while utilizing the extensive natural-gas assets already in place in the province.

Renewable natural gas for the future

Enbridge Gas Distribution’s power-to-gas (P2G) plant in Ontario is now taking surplus off-peak electricity and converting it to Hydrogen through a process called electrolysis, which can be stored for future use. The plant is rated at 2.5MW and can be expanded to 5MW of output power. This Enbridge facility is the first utility-scale P2G plant in North America. The P2G plant provides grid regulation service to the province’s power grid through the Independent Electricity Service Operator (IESO), while increasing the flexibility of Ontario’s electrical system. Future applications of P2G include the blending of zero-emissions hydrogen into the gas distribution system to lower its carbon footprint using the produced hydrogen as fuel for Fuel Cell Electric Vehicles (FCEV), as well as rail transportation.

As certain contracts with key service providers begin to expire, we will hire industry professionals and develop rigorous procedures for safely operating and maintaining our wind project assets ourselves. This step will help us to transition our business to operational self-performance, which will involve scheduled and unscheduled inspections, repairs and maintenance of wind turbines, monitoring performance of wind turbines and managing balance-of-plant infrastructure, including electrical inspections, testing and repairs. This step will also increase our familiarity with the assets and provide greater opportunities for optimizing financial performance.

In 2017, we continue advancing our self-performance strategy at our Talbot and Greenwich wind farms in Ontario. To prepare for this transition, we have been working to develop safety and maintenance programs for the sites. We have also hired and trained additional technical staff. We are evaluating further opportunities for self-performance across our fleet in Canada and the U.S.

Previous
Next: Employee Relations
Don't lose your comments!
Make sure you bookmark or email this unique key to yourself so that you can always access your comments. Your comments will remain completely anonymous and will not be shared with any third party organizations or individuals. Read more about Enbridge's privacy policy.
Copy to clipboard
Email
Submit
Add Comment
OPEN
save comment