Call 811 before you dig—for your generation, and the next

'It only takes a few minutes, and it could save your life'

It was just another late fall day for John and Rick Proulx.

The father-and-son farming duo was doing some cleanup work late last October on their land in northwestern Minnesota, in advance of the winter freeze.

But in moments, the situation changed for both men from just another day to a day unlike any other. As the two worked to clear trees, John heard a loud scraping sound from the cab of the excavator he was operating—and dismounted to see what had happened. Rick was busy running a chainsaw, and glanced up to see his father’s face. He knew immediately that something was wrong.

“I knew there was a chance it was the pipeline,” says John. “I knew by the sound that it was not just a rock.”

The Proulx family has been farming land in Pennington County, MN, and the surrounding area for more than 50 years, specializing in wheat and soybeans. John has been involved with the farm for more than 40 years, and Rick joined the operation about eight years ago.

“Farming is more than just a job,” says Rick. “It’s a lifestyle.” 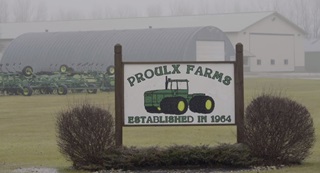 VIDEO:: Watch farmers John and Rick Proulx talk about a close call on their Minnesota spread The two were aware that there was an Enbridge pipeline in the area. They had previous contact with Enbridge personnel, and Enbridge’s permanent pipeline markers are visible at the end of the field.

But because John and Rick had worked in the same area many times before and recalled the general location of the pipeline, they neglected to “call or click” before beginning their work.

Calling 811 (U.S.) or visiting ClickBeforeYouDig.com (U.S. and Canada) provides you with free services designed to keep you safe while digging or excavating. Within two to three business days (five in Ontario), professional locators will mark underground utilities at no cost with flags or paint so you can work safely around them, saving you from potential injury or property damage.

John and Rick surveyed the damage and could see a scrape and dent on the top of the Enbridge pipeline. John called the Enbridge emergency number for his region. Soon, crews arrived to inspect the pipeline, which was damaged in three places, and shut it down. Enbridge operators worked through the night, spending about 40 hours to repair the line. They also explained to John and Rick the potential danger they would have faced, had the line ruptured.

“We consider ourselves very lucky,” says John. “We realize now that the incident could have been fatal.”

These days, John and Rick are using their experience to educate others, working with Enbridge to produce Call Before You Dig videos that are being used to promote safe digging throughout North America.

“This is the type of thing that keeps me up at night,” says Trent Wetmore, director of operations for Enbridge’s Superior Region, where the pipeline is located. “As pipeline operators, we want to do everything we can to make sure that those who live and work near our pipelines remain safe. We’re pleased that John and Rick are willing to work with us to share this important message.”

John’s message to other farmers is simple and direct: “Take the time to make the call. It’s free, it only takes a few minutes, and it could save your life. We put a lot of work in for the next generation, and one mistake can really change all that.”